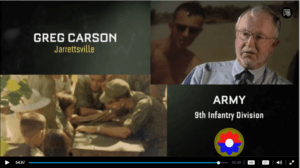 Greg Carson was interviewed and appears in a three-hour documentary film called Maryland Vietnam War Stories, produced by Maryland Public Television.  Greg originally got onto MPT’s radar when he attended a March 2014 “listening session” with 14 other Vietnam veterans conducted by the film’s executive producer. After hearing Greg’s reflections on the war, the producer, Ken Day, invited Greg to visit the MPT studios for a taping.  (Along with the footage from other veterans’ taping sessions at MPT, Greg’s complete interview will be turned over to the U.S. Library of Congress and to the Maryland Historical Society, both of which organizations will preserve some 120 hours of MPT Vietnam interviews for posterity.) The documentary had its debut in Maryland in late May 2016 and then was released nationally to other public TV stations across the nation under the name American War Stories: Vietnam.

DVDs are available online for a contribution to Maryland Public Television at mpt.org/donate.  A $60 pledge comes with one DVD; for a $96 pledge, donors receive two copies of the film.

The Community Foundation of Harford County is the benefactor of the Exclusively® Series, a set of publications designed to introduce individuals in specific locales. Stark and Keenan, P.A. is featured in the Business and Professional Section.
Click here to see our article. Exclusively Harford County 2011

Please fill out the form below and one of our attorneys will contact you.